Home Europe ‘No deal’ for transfer amid reports of Sheffield United’s ‘serious interest’ in...
SHARE

Two days ago, we covered claims coming out of Belgium that Sheffield United have shown ‘serious interest’ in signing Anderlecht’s Elias Cobbaut.

It was also explained the Blades haven’t submitted a proposal for the defender, but they were expected to prepare a bid.

Le Soir and Het Laatste Nieuws both reported the Jupiler Pro League side are ready to give the green signal for a transfer in the winter market, since they are short of funds.

The claims made by the two outlets have been relayed by today’s editions of Het Belang van Limburg and Het Nieuwsblad.

It’s stated Anderlecht are ready to allow the 22-year-old leave the club and have slapped a €10m asking price on him. 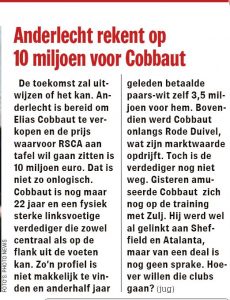 Het Nieuwsblad adds the price quoted is not ‘illogical’ because of the player’s age and his versatility. Cobbaut can operate as a left-back or centre-back.

Sheffield United links are once again mentioned by HBVL and Het Nieuwsblad, but both newspapers explain there is ‘still no deal’ for a transfer.