Home Europe “A nice fight” – Defender will motivate himself with ‘aggressive songs’ for...
SHARE

David Moyes’ side are bossing Group H at the moment, with ten points from their four matches so far. The Austrians, meanwhile, are at the bottom with just three points and need a result from their home fixture against the Hammers.

The first tie between the two was held at the end of September, with Declan Rice and Said Benrahma sealing a 2-0 victory for the Premier League club. There’s every chance Moyes will field a weakened side for the clash this week, especially with the huge challenge of Manchester City away coming up on Sunday.

Emanuel Aiwu played the first match as a right-back for Rapid, and he hopes to be in action again this week. The 20-year-old is versatile and that’s helped him pick up 20 appearances so far this season, playing a mixture of central-defence, right-back and defensive-midfield.

Ahead of the match against West Ham, the youngster has been speaking to the Austrian media, and he’s clearly excited about the chance to play against a Premier League team again. 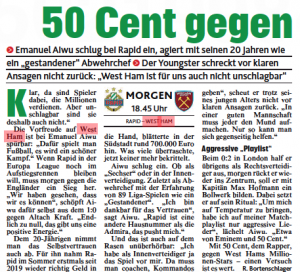 Kronen Zeitung, an Austrian newspaper, quote him as saying: “Sure, there are players who make millions. But that doesn’t make them unbeatable. That’s what you play football for, it’s going to be a nice fight.”

Asked about what he listens to, to get himself motivated ahead of a match, Aiwu said: “To get me up to temperature, I only have aggressive songs on my match playlist.. Eminem and 50 Cent.”