It had been over a week since the Italian media did something on Manchester City’s reported interest in Napoli’s Fabián Ruiz, so we were bound to get something soon.

Thankfully (read that in a sarcastic tone), Corriere dello Sport give us a bit of information to work with on Wednesday, as they look at the future of a number of players from the Serie A side.

They save the Spaniard until last, explaining there could be a chance of a sale, probably in June, as there’s a feeling Ruiz has ‘let himself go’ over the past few months.

Napoli are aware the €30m they paid a year and a half ago ‘have already grown and multiplied enough’, and therefore ‘will not avoid solicitations’ from interested clubs. 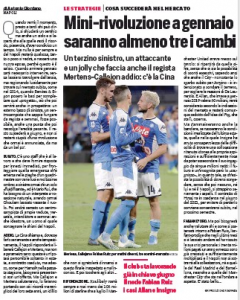 Real Madrid and Barcelona are the first two mentioned, as the pair wouldn’t mind bringing the midfielder back to Spain, but they don’t forget about Manchester City either.

It’s claimed Pep Guardiola’s side are ‘in the shadows and waiting’, and end the article with “It’s been nice…”, suggesting the union between Napoli and Ruiz could be coming to an end.

It just remains to be seen if his next destination will be the Etihad, or somewhere in Spain.