Mundo Deportivo claim the trio returned to Barcelona on Tuesday afternoon and have presented both sides’ position.

The La Liga winners have insisted they are only willing to sign the forward by offering a few of their players in exchange and without paying any money.

Meanwhile, Thomas Tuchel’s side are demanding money plus players to sanction the Brazilian’s sale.

Coutinho and Nelson Semedo are the most popular targets at Parc des Princes and Mundo believe Leonardo would be willing to close the deal, if Barca offer these two players.

The position of the two clubs still remain far apart but negotiations are still open and more meetings are expected to take place in the next few days. 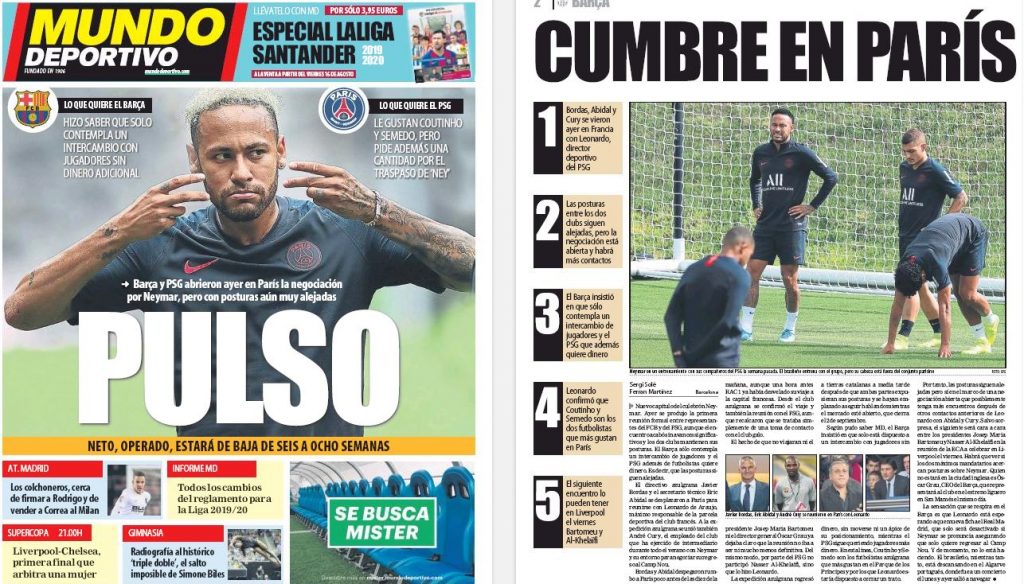 Unless and until there are last minute changes, the next meeting will be between Al-Khelaïfi and Bartomeu at the European Club Association (ECA) in Liverpool on Friday.

Mundo states Leonardo is waiting for Real Madrid to make an effort and Barca believe that path will only be deactivated if Neymar publicly expresses his desire to return to Camp Nou.

After Tuesday’s meeting, Sport state the two parties couldn’t agree on a final figure that Barcelona must pay to PSG for Neymar.

It’s claimed PSG will continue to seek €100m plus players, but Barca are only planning to negotiate for a fee of around €50m and offer their players as a part of the deal.

Ernesto Valverde’s side and PSG will have more contacts in the coming days as their idea is to reach a final agreement.

Neymar and his employer want to close the deal as soon as possible as the latter are of the belief they can no longer continue to drag the ongoing saga.

Barca are ‘moderately optimistic’ the player will return to the club, but are aware that a lot of work needs to be done for the deal to take shape.