Leeds United fans should get excited. There’s a Neymar at the Championship club.

Well, at least according to Spanish newspaper Marca and their Thursday edition.

Hailing Saiz’s move from SD Huesca to Elland Road as an example of how things can work out for Segunda Division players switching to England, Marca make everything sound quite fairytale.

Saiz himself is quoted as saying: “The stadium is crazy, incredible. They don’t stop cheering and they’re always singing to me. Every time they sing the song they’ve made for me, they make my hair stand on end.”

The Spaniard’s style ‘evokes that of Neymar’, say Marca, in an article they’ve headlined ‘The Neymar of Leeds’. It’s all gushing stuff and whilst Leeds United’s current struggles are completely ignored, there’s nothing wrong with a little optimism to be thrown in among the Elland Road malaise.

Saiz has been a good signing, and Marca believe there’s good times ahead for him and Leeds.

The 26 year old is clearly excited himself, and explained to the Spanish newspaper: “I’m not a big deal. I’m a very cheeky player, I’m not afraid. I always try to do what comes to mind, I would say that I am very showy. My game is quite vertical, I always look forward. I can play on the left wing going in, with freedom, but I prefer playing as a playmaker: you participate more in the game.” 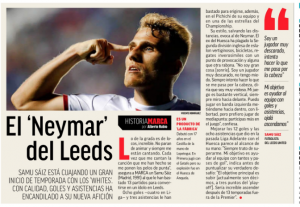 If there is a cloud hanging around Leeds right now, it’s not managed to dampen Saiz’s enthusiasm, and perhaps that’s something for fans to looks towards for optimism. Telling Marca he’s determined to beat the 12 goals he scored with Huesca last season, Saiz is equally focused on getting his club to the Premier League’s promised land.

“I always try to improve myself. My goal is to help the team with many goals and assists. The main objective is to go up. It would be incredible to go up after 13 seasons outside the Premier League.”

See, turn that frown upside down and inhale some Saiz optimism. The Neymar of Leeds United is on a mission, and sounds very excited about it all.