If Everton fans had their own way, then Christoph Galtier would have long been installed as their new manager.

The French boss was the outstanding candidate as far as the Everton fanbase were concerned, with a number of reasons making him the ideal man to replace Carlo Ancelotti.

It seems the Blues agreed in some capacity, with several reports having indicated that Everton did indeed talk to the Lille boss at some point.

Obviously, they never went well in whatever capacity, as Everton are now closing in on Rafa Benitez, and Galtier is nearing Nice, according to L’Equipe.

They cover the situation today, explaining how Galtier is closing in on the move he wanted after weeks of uncertainty and negotiations.

At first, it seemed the move would be ‘rather simple’ for Galtier, who agreed to join Nice weeks ago and made his desire clear to Lille, despite having a year left on his deal.

Lille president Olivier Létang wasn’t impressed, though, and that’s when things got complicated. He was annoyed by the manner in which Nice had gone about things and demanded at least €10m for his coach. 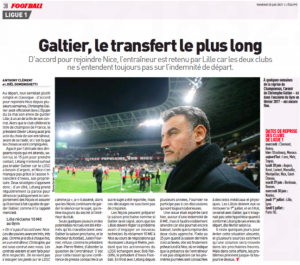 That’s a price they are sticking to, and a solution was hoped for yesterday, with a fee of around €8m nearly agreed.

It’s yet to happen yet, although there is growing confidence it can be sorted in a couple of days, or even the ‘next few hours’ so this ‘absurd situation’ can be ended once and for all.

That means if Everton are interested in Galtier, they need to make their last move as quickly as they can, with him very much closing in on a move elsewhere.