Following reports from the English press, newspaper Record had been the first to react to it this week, saying such a chase didn’t exist.

However, A Bola comes up with new claims today, reporting they were ‘guaranteed’ that Spurs are following the 22-year-old.

Tottenham and the other Premier League clubs who are interested in Jovane are still to place official bids for him, and Sporting’s board are said to be waiting for them. 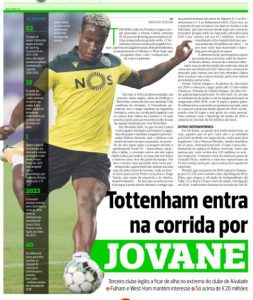 Jovane is considered an important player for in the squad, so the Lions will demand at least €20m to let him go this summer.

Despite insisting they’ve been able to confirm Tottenham’s interest in adding the player to their squad, A Bola doesn’t bring any additional information on how far Spurs could go for his signing.

With only six goals and three assists last season, it seems a little strange that Jovane managed to draw José Mourinho’s attention. Perhaps the manager sees him as a good rotation option, or a potential star for the future, given he’s only 22.