Despite reports from this week pointing out several possible destinations for Rafael Camacho, the Portuguese press is still pretty confident the Liverpool player is signing for Sporting.

Newspaper Record writes today that not even the moves from Schalke 04 and Wolverhampton Wanderers seem enough to stop the winger’s move back to the Lions.

Record claims that Liverpool started the negotiations demanding €10m, but the inclusion of a buy-back clause and a percentage of a future transfer could help Sporting to get a discount.

This percentage, which the Reds want to be 20%, is said to be crucial for the agreement to be reached. Between Sporting and Camacho, it’s said to be all sorted. 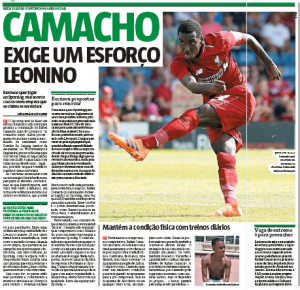 Especially regarding yesterday’s claims from Kicker, Record confirms that Schalke would have the conditions to pay Liverpool the €10m and give Camacho a bigger salary than the one he will get at Sporting.

However, the player is said to be focused on moving to the Lions, where he’s sure he will get the playing time he wants.