Unless accepted knowledge is wrong and Leicester City are liars, La Nazione are making right Praets out of themselves.

On Monday we covered claims from the Florence newspaper of Fiorentina interest in Dennis Praet, which in itself isn’t so alarming. He’s got Serie A experience and whilst it would be a long shot to convince the Foxes, it’s not beyond the realms of possibility.

The problem was that La Nazione, and perhaps by extension Fiorentina, believed Praet is only on loan at Leicester and is still actually owned by Sampdoria. It was even claimed the midfielder had contacted his Genoa parent club to tell them he’s not entirely happy where he is.

A quick Google confirms (via the Leicester press release) we’re not imagining things, and that the Belgian arrived in England on a full transfer, not a loan: ‘Dennis Praet Signs For Leicester City On Permanent Deal’

People make mistakes, and we expected that La Nazione would either completely forget they’d ever mentioned Praet, or backtrack and report correctly who owns him. 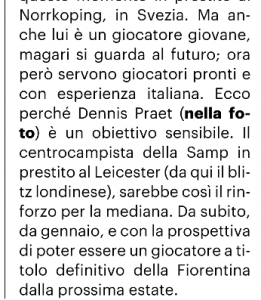 In the Thursday edition the newspaper continues the claims, stating the ‘Samp midfielder’ is ‘on loan at Leicester’.