Matz Sels joined Belgium club Anderlecht from Newcastle United on a season-long loan deal last summer, a year after he signed for the Tyneside club from Gent.

The 26-year-old has impressed for the Belgian outfit this season and his form has made Anderlecht make an effort to sign Sels on a permanent deal, reports Het Laatste Nieuws.

Newcastle are open to the idea of allowing Sels to leave the club this summer as the report claims the goalkeeper has no future at St James’ Park.

The Premier League club are hopeful of recovering “large part” of the €6m+ they paid by sanctioning Sels’ sale. Newcastle and Anderlecht have already started negotiations to see if the latter can sign the player on a permanent deal. 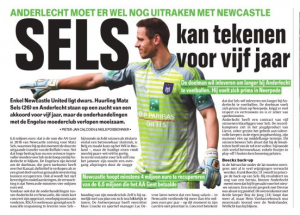 It’s believed Rafael Benitez’s side value the stopper around €4m, and this is causing problems.

Newcastle’s ‘stiff’ attitude is creating the trouble for Anderlecht and Sels, with the goalkeeper already accepting he’ll take a big pay cut and sign a five year deal.

Belgian clubs obviously don’t have as much money as those in the Premier League, but €4m seems very reasonable indeed.

On Tuesday we covered reports from another Belgian newspaper, Het Belang van Limburg, which stated Anderlecht will do ‘everything’ to get the player. If that doesn’t involve paying something around €4m then perhaps Newcastle should encourage Sels’ agent to start looking elsewhere.