Earlier on Friday, we covered a story in Gazzetta dello Sport regarding Newcastle’s interest in Stefano Sturaro.

The midfielder was said to be ‘on his way to the Premier League’, with the Magpies in pole position to acquire his services, prepared to get closer to the €20m or so Juventus were requesting.

Well, Tuttosport have backed this up on the same day, reporting a similar story, claiming Newcastle were the best placed out of a trio also including Leicester City and West Ham.

The Serie A champions, in this version, only want €18m for the midfielder, which is the same amount TuttoMercatoWeb published on Thursday, but Newcastle have only offered €14m with some bonuses thrown in for good measure. 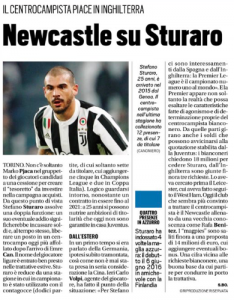 Tuttosport also explain that Sturaro’s exit would benefit Juventus in two ways: help with their bank account, but also free up a slot in midfield for an already crowded position, especially since the arrival of Emre Can.

We’d even be inclined to say that if Newcastle do up their offer a little bit, there shouldn’t be any issues standing in between Sturaro and a move to St James’ Park.