Fotomac claim Galatasaray are interested in signing Benfica’s Andreas Samaris but Newcastle United, Wolverhampton Wanderers and West Ham are also in the race to sign the Greece international.

The Turkish side have been linked with the Benfica midfielder in past transfer windows and Fotomac claim they are again tracking the player.

Samaris will become a free agent at the end of the season and it’s claimed the Turkish side are ready to make a lucrative offer to convince him to join the club.

With the uncertainty over Stoke City loanee Badou Ndiaye’s future, Galatasaray could be looking to bring Samaris this summer but it’s likely they will face competition from Newcastle United, Wolves and West Ham.

Newcastle United have been linked with the Greek midfielder in recent windows and Wolves have looked to Portugal in past windows to recruit players. It also seems West Ham could be an option for the Benfica man. 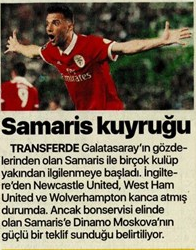 The 29 year old has played 26 games for Benfica in all competitions this season, scoring two goals.