With Boubacar Kamara’s contract at Marseille running down in the summer, it’s only natural for a lot of other clubs to be interested.

Touted as a great prospect from a young age, the defender turned midfielder is now very likely to head to a new club this summer, with the Premier League a potential destination.

Serie A sides will have to say something about that if they can, but Corriere dello Sport, who look at it from an AS Roma perspective, state they are a step behind the likes of Newcastle United and West Ham United.

The Magpies already tried to sign Kamara late in the summer, but the player, who wanted to play Champions League football with his childhood club, turned them down. 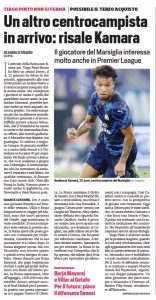 As for West Ham, it isn’t surprising to see them go after a player who can both play at centre-back and potentially offer a solution in midfield should Declan Rice eventually be sold for a huge sum of money.

Corriere dello Sport, in their Thursday edition, make it clear that Newcastle and West Ham are ‘in pole’ when it comes to Premier League clubs tracking Kamara.

He is ‘liked a lot’ in England, likely for both his versatility and ability on the ball for a 22-year-old, meaning the Hammers and the Magpies are going to have to battle hard to come out winners.