Back towards the end of December, Le10 Sport in France claimed that both Bournemouth and Newcastle were interested in signing Troyes’ revelation of the season Samuel Grandsir.

The 21-year-old forward has impressed this season with the promoted side, scoring two goals and picking up five assists in 20 appearances, which has led to the alleged interest from the Premier League.

At the time, neither the Magpies nor the Cherries had made an offer, only throwing feelers around to try and judge whether or not a deal could be done.

Well, it appears they’ve been joined by West Brom, as Le10 Sport, in their monthly magazine, claim Newcastle and the Baggies have put money on the table for the right winger. 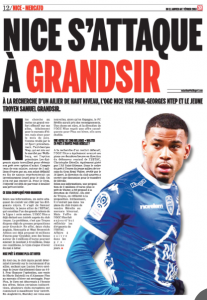 Said to be around €13m (€10m + €3m in bonuses), the outcome of those bids has yet to be revealed, but Troyes’ tune in December was that they were adamant in wanting to keep their starlet until the end of the season.

West Brom’s sudden interest in Grandsir probably shouldn’t come as a surprise, as we all know Alan Pardew is a big fan of Ligue 1 players, as demonstrated during his time at St James’ Park.

We’ll have to see what happens, but if a Premier League team really want the 21-year-old, they can probably force Troyes’ hand with money.