Home Championship Newcastle and West Brom positioned as favourites in transfer, as Benitez and...
SHARE

Newcastle United and West Brom continue being mentioned among the favourites to sign William Carvalho from Sporting this summer.

Portuguese newspaper O Jogo has a story today saying the Lions want to make €70m from sales in this transfer window, and although Carvalho is the first man to leave, that will obviously not be enough.

That’s why Sporting will keep pushing for the maximum they can get with those sales, with O Jogo recalling Bruno de Carvalho saying he wouldn’t let the midfielder go for only €30m.

Carvalho has a €45m release clause, and that’s what Sporting will be leaning on before taking any offers. Speaking of the Premier League interest, it’s claimed that Newcastle and Rafael Benitez see the player as someone who would take the club to another level after promotion.

On West Brom, it’s still recalled that Tony Pulis has travelled to Portugal just to watch the player, which will be enough for the rumour to be dragged out for the entire summer. 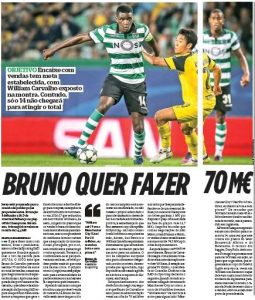 But there’s still no information about negotiations or bids from any of these clubs. It seems a bit early in the transfer window to expect some big moves, so the Portuguese press better be more patient.

Neither Newcastle or West Brom will want to pay anything like €45m for Carvalho, and they almost certainly wouldn’t have to.