Newcastle United have been namechecked with potential big signings and the number of transfer reports are only going to rise if the expected takeover led by the Saudi’s is completed.

After being linked with the likes of Paris Saint-Germain’s Edinson Cavani and Napoli defender Kalidou Koulibaly, the Magpies interest in Ajax’s Donny van de Beek emerged on Tuesday.

Real Madrid have also been credited with an interest in the Netherlands international since the end of last season. Sport now claims it’s been a few months since Madrid asked for  time to decide on the 23-year-old.

This has not pleased the midfielder’s representative and therefore, the latter has ‘officially’ started listening to proposals from the Premier League for the player.

Steve Bruce’s side get a mention as the report adds the Premier League side are ‘lurking’ around Van de Beek.

It’s claimed the Tyneside club ‘would be interested’ in taking over the Dutchman’s services, who is expected to leave Ajax for a ‘fairly reasonable price’ in the summer. 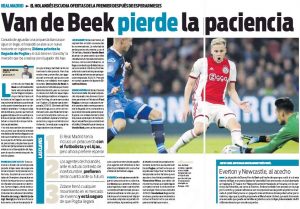 The newspaper mentions the Eredivisie side are asking around ‘€60m for one of their pearls’.

Van de Beek’s priority is to look for an ‘ambitious project’ and whether or not Newcastle can meet his sporting demands remains to be seen.