Ricardo Horta is enjoying a great season with SC Braga, and Tuesday’s edition of Record reports he’s been one of the most influential wingers in Europe so far this season.

In 39 appearances across all competitions, Horta has found the back of the net 18 times and made a further seven assists. He’s crucial to his team, and Braga were set against a sale in the winter transfer window.

Record once again brings up Newcastle United interest, and they state the Magpies were ‘willing to shell out nearly €12m’ in January, but it wasn’t enough. Braga have Horta on a contract lasting until June 2024, so they have no pressure in that regard.

The 25 year old has a €30m buyout clause, and whilst they may sell for less, it’s unlikely to be as low as the €12m Newcastle wanted it to be. 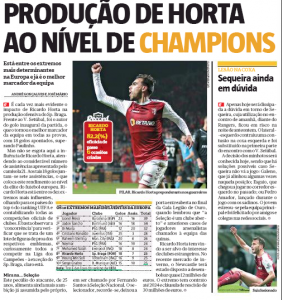 Steve Bruce’s side will have to work quick to beat competition in the summer window, with an increasing number of scouts watching Braga in recent months.

Southampton have appeared on several Braga scouting lists in recent months and there’s a good chance Horta has caught their eye too.

Now the player wants international recognition, and should he end up in Portugal’s Euro 2020 squad then things will be even harder for Newcastle United.