Newcastle United received quite a bit of attention in Latin America on Wednesday, after announcing the signing of Kenedy from Chelsea on a six-month loan deal.

You’d probably think that it’s the Brazilian media who’s making the biggest coverage about the move, but it’s actually from Mexico that the big fuss is coming. We’ll explain it.

After announcing the transfer, Newcastle’s twitter account posted a link to a photo gallery, with its featured picture showing Kenedy’s leg tattoos.

The player is a big fan of ‘El Chavo Del Ocho’, an old TV show known in Brazil simply as ‘Chaves’. He has Don Ramon, one of the characters, on his right leg, and that’s what attracted the attention of Mexican people, who tried explaining it to Newcastle fans by replying to the tweet.

📸 GALLERY: We take you through new signing Kenedy’s career so far in pictures… 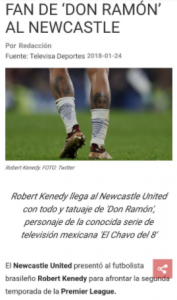 Televisa, one of the most popular TV channels in the Central American country, reported the move simply saying ‘Don Ramon fan to Newcastle’, making Kenedy’s tattoo a big deal.

El Chavo Del Ocho was originally aired in Mexico between 1971 and 1980, but its success in Latin America was so huge that it’s still on Brazilian TV to this day.

The show’s creator Roberto Bolaños, also responsible for another popular program, ‘El Chapulín Colorado’, passed away in November 2014. His body had a public funeral at the Azteca Stadium, home of his favourite club America, where thousands of fans could bid him farewell. Mexican league games had one minute of silence in his honour a few days later.