Julian Álvarez’s potential departure from River Plate continues being the main transfer business the Buenos Aires side could make in the coming months, so the local media won’t stop talking about it.

Several clubs keep being linked to the prolific striker, with Newcastle United being one of the latest to be added to the list.

“The only way for Álvarez to go is that a club comes and triggers the release clause,” said Brito. 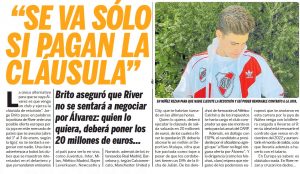 Olé says this is a ‘clear warning’ to all the clubs who’ve been following the striker, and the list is pretty long.

They first mention the sides who’ve been sending scouts to watch the player, which are Juventus, Inter Milan, Milan, Atletico Madrid, Bayer Leverkusen, Newcastle United and Norwich City. Then there are those who are only interested, including Real Madrid, Barcelona, Manchester United and Manchester City.

Álvarez is protected by a release clause worth €20m. Brito has told the local media that no offers arrived at River Plate so far, while the club’s board are hoping that there will be no bids, as they want to renew his contract and keep him for longer.

It’s ‘the clause or nothing’, Olé writes.