Fanatik claim Stoke City midfielder Badou Ndiaye is currently in talks with Newcastle United over a potential move this summer, but the Premier League club need to act quickly due to Galatasaray’s interest.

According to Fanatik, Newcastle United are in discussions with Ndiaye but there’s no agreement yet.

After Senegal’s elimination from the World Cup yesterday the player’s future should be resolved in the next couple of weeks and the English side should expect to face competition from Galatasaray.

It’s claimed Galatasaray are following the situation very closely and if a move to Newcastle United doesn’t materialise then they will look move in on the Stoke City player.

The Turkish newspaper report Galatasaray manager Fatih Terim is ready to wait for Ndiaye as he’s made the Senegal international a prime target in this window. 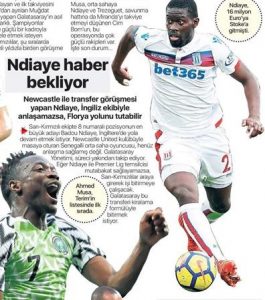 Ndiaye joined Stoke City from Galatasaray in January, just six months after he signed for the Turkish giants from Osmanlispor.

However, with Stoke City’s relegation to the Championship, Ndiaye may look to leave the Potters in this transfer window.