With Newcastle United’s takeover by a mainly Saudi consortium edging ever closer, the Magpies have been linked with several potential big money transfers.

Real Betis star Nabil Fekir is the subject of one such rumour.

AS claims Steve Bruce’s side have ‘already taken an interest’ in the attacking midfielder.

The Spanish side want ‘at least’ €50m for the 26-year-old, but no club have yet ‘reached’ such an amount. Such a claim gives the insinuation there has been offers, although it could be from Newcastle, AC Milan or Arsenal, with those the three clubs named.

Apart from the fee needed for the transfer, the France international’s stance further makes it difficult for Newcastle to acquire his services.

If the World Cup winner were to leave Betis, he wants to join a side who will compete in European competition next season. 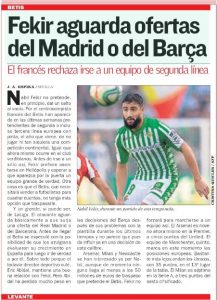 A move to St James’ Park means no European football, and the playmaker would rather continue at Betis and wait for a bigger, or more successful, club to make an approach for him.

Fekir’s preference is to join a top club in Spain and the report adds he’s waiting for an offer from Real Madrid or Barcelona.