This morning, we covered reports from the Portuguese press saying Newcastle United were about to make an offer for the Braga winger Ricardo Horta.

Now it looks like he’s not the only player in Portugal who the Magpies have been keeping an eye on, and could be making an attempt for in the January window.

According to a short report from newspaper Record today, Newcastle have also been following Leixões midfielder Jean Onana.

The Premier League side would be alongside Lille, Basel and Almeria in the race for the 20-year-old. 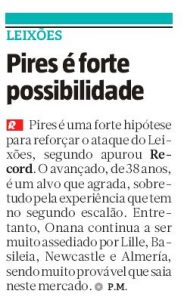 Record says it’s ‘very likely’ he’ll be leaving Leixões in the January transfer window, even though there are no details on how much he would cost.

Leixões are a club from Portuguese Segunda Liga, and that’s why the coverage around them isn’t huge, so it’s unlikely we’ll be getting many updates on this rumour. Especially because Onana hasn’t even been playing for the first team, as he’s been getting minutes in the U23 League.