Newcastle United are reportedly one of the clubs interested in signing Nemanja Gudelj from Guangzhou Evergrande.

Newspaper O Jogo brings a story today claiming that although Sporting would like to have him on loan for another season, it’s unlikely that they can compete with other clubs.

It’s claimed that Newcastle, Real Bétis, Fenerbahce and Galatasaray are all keen on the player, and could pay more in wages and transfer bonuses.

Gudelj has made 27 appearances for Sporting this season, and even wanted to stay at the Portuguese club, as he’s accepted to take a pay cut in case of a permanent transfer. 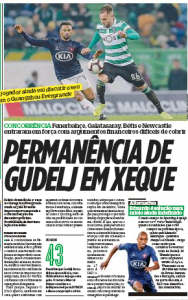 However, O Jogo claims it’s more likely that the other sides land him, since they’re offering him something close to the €5m net per season he makes at the Chinese club.

The newspaper doesn’t make it clear who’s leading the race for now, or even if the clubs are negotiating a loan deal or a permanent transfer.

So it looks like things are still in the early stages.