Fanatik report Galatasaray have placed Ryan Babel on the transfer list and Newcastle United and Ajax are interested in signing him.

The Dutch attacker joined Galatasaray last summer on a free transfer after his contract with Fulham expired. However, he’s struggled to make a real impact on his return to the Super Lig and could now be offloaded by Gala.

This month the Turkish champions have already re-signed former player Henry Onyekuru on a loan deal from AS Monaco which puts doubts over Babel’s future with the club.

According to Fanatik, Ajax have made the most concrete move for the 32 year old, but Newcastle United are also in the picture after contacting Galatasaray via intermediaries.

Steve Bruce will be desperate to bring in reinforcements in January due to injuries, and signing an experienced attacker like Babel could be a good move for the Magpies.

Fanatik report Ajax are currently leading the race for the Netherlands international and Galatasaray will want a transfer fee for him. 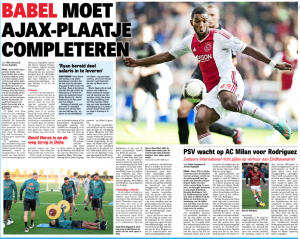 Wednesday’s edition of Dutch newspaper De Telegraaf reports Babel could be on the verge of a move to Amsterdam, returning to his former club.

They’ve spoken to the player’s agent Winny Haatrecht who confirmed negotiations are ongoing. Newcastle United don’t get a mention in the Dutch report.