Home Europe Newcastle United offer said to have been €28m – One of 8...
SHARE

On June 9th, we covered claims from French newspaper L’Equipe that Newcastle United had made a firm offer for Jean-Philippe Mateta.

They weren’t the only club interested, with Southampton said to be in the same situation, and the offers received were put at €20-25m.

That wasn’t enough for Mainz to sell the striker, and it’s now claimed Newcastle offered even more.

SportBild report the Premier League club put forward around €28m for the 22 year old, an amount which also wasn’t enough.

Newcastle were one of eight clubs to contact Mainz and ask about the striker during the summer window, with the others named as Watford, Everton, Brighton, Cardiff City, AS Monaco and Marseille.

Now Tottenham and Southampton are pushed forward, showing the Saints interest, at least according to L’Equipe, goes back to June. 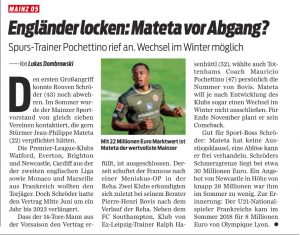 Mateta doesn’t rule out a move during the winter window, report SportBild, but first he needs to return from an injury lay-off.

He hasn’t played yet this season after a meniscus operation, and until he’s back and firing it’s surely unrealistic to believe a club would offer more than Newcastle United did.