Newcastle United have been the ‘most insistent’ in terms of suitors for Real Valladolid defender Mohammed Salisu this summer.

The centre back has earned himself admirers around Europe after a series of impressive performances for the Spanish side this season.

His potential, coupled with a relatively low release clause of €12m, has caught the attention of clubs looking to improve their defences this summer.

He’s become a more attractive proposition as a result of the outbreak of Coronavirus, which is likely to leave most budgets decimated.

Numerous reports have indicated that there is interest from the Premier League, something Valladolid’s director of football Miguel Ángel Gómez confirmed in an interview with Radio Marca.

“There are interested clubs that have already passed from interest, and we already talk about concrete things,” he told the station.

“There are offers on the table. These are more things from the Board of Directors.

“We want the player to stay here, but if he decides that there is another nice project, in Spain or abroad, the club will refer to the clause.

“There are teams that are willing to pay for it. There are teams from Spain and also from abroad. Premier League, two in France, three in Italy and in Spain really one.

“When I say really is that a club has come and said they want to undertake the operation and speaks of a quantity.” 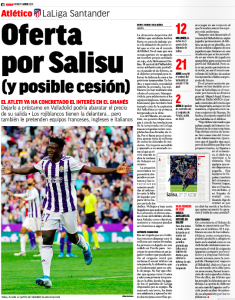 He failed to name who the Premier League side was but, according to El Desmarque, it is Newcastle United, who have been ‘most insistent’ about securing his signature.

However, according to the website, Newcastle know it will be challenging to get a deal done because there are higher-profile teams than themselves pushing.

Chief among them are Atlético Madrid, who Marca explain are working on various scenarios to sign the player, with one idea to leave him at Valladolid on loan for another year.