Manchester City continue being linked with Kylian Mbappe by L’Equipe, but given the French newspaper also continue to link Liverpool, that doesn’t mean a great deal on its own.

Saturday’s edition of L’Equipe also reports Pep Guardiola’s side have made a late swoop to try and snatch Adama Diakhaby. Newcastle United have also made efforts to sign the Rennes player this summer, but, unless something dramatic happens, both Premier League sides look set to lose out to AS Monaco. 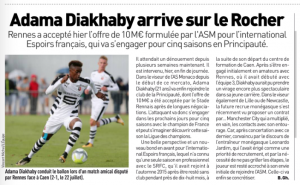 Newcastle spotted the 21 year old’s talents a while ago, but it took Manchester City a little longer to get into the tussle to sign him. Guardiola’s side have tried to convince Diakhaby to choose them over Monaco, but L’Equipe say that effort hasn’t worked.

Rafael Benitez and Pep Guardiola are going to need a big effort to change this one around, with Monaco now agreeing a €10m fee with Rennes.