It’s hard to know why the Lewis Holtby to Newcastle United rumour started, but it did and it hasn’t gone away since. The Daily Mirror took credit for one of the claims in the summer, and since then Holtby moving to St James Park has been a regular German and English media story.

Hamburger Morgenpost mention it again on Monday, but even they do so whilst adding some doubt. MoPo state that the rumours have been coming from England, but Newcastle United haven’t contacted Hamburg yet.

Anyway, Holtby is being edged out of Hamburg so much that he wasn’t even in the club’s squad for the VfB Stuttgart game ahead of international break, so had to watch from the stands. 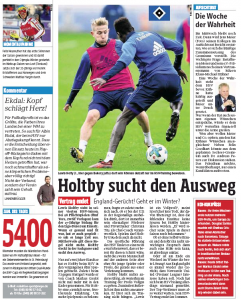 MoPo quote HSV sporting director Jens Todt as stating Holtby is a professional so is expected to continue training at full throttle, and “He will surely get his games this season.”

With a contract ending in June, and high wages that HSV, in an increasingly grim financial fight, could do without, it doesn’t take Sherlock Holmes to work out Holtby may be encouraged to accept a January exit.

As we’ve pointed out previously, if Newcastle interest is genuine, then they can likely get him on an early free transfer, such is HSV’s position. Rafael Benitez may like the Premier League experience Holtby has, but there’s not an awful lot more going for him right now.