Everton were strongly linked with Luis Diaz during the summer transfer window, even if some of the claims seemed to push the story further along than reality.

The FC Porto player had starred at the Copa America for Colombia, and his profile was rising. Given Everton had James Rodriguez at the time, and also Yerry Mina, reports about the Toffees got a little carried away in the Colombian media.

Rafael Benitez’s side have been linked repeatedly since then, but it’s quite possible Diaz is already out of Everton’s reach. Newcastle United have been pulled into the story in recent weeks, and they’re mentioned by A Bola, along with both Merseyside clubs, Chelsea, Real Madrid and AC Milan.

The whole point of the report is to insist Luiz Diaz is now a serious candidate to break Porto’s transfer record, currently held by Eder Militao and his €50m move to Real Madrid in 2019, and that he’s not beyond the reach of some.

Diaz has a release clause worth €80m, yet despite all the talk of Porto sticking to that figure, it’s near-certain they’d accept less. However, that €50m looks a good figure to start at, because the Portuguese side would then be able to present the sale as something of a win. 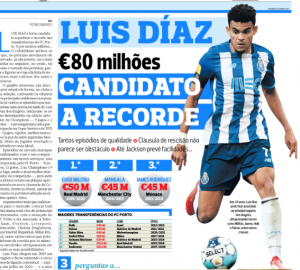 For Newcastle United, that could be a level of investment they’re able to manage, unlike Everton at this moment in time. The Magpies have been scouting Porto recently, so the pieces of the jigsaw begin to fit together, even if the claims following those scouting trips got a little carried away.

Everton look out of the race, and Liverpool and Chelsea links haven’t really been strong, the same for Madrid and Milan. Therefore, Newcastle look well placed for this potential signing, which would likelier be for the summer rather than January.