Newcastle United have ‘expressed their interest’ in Reims defender Wout Faes, who is set to leave the French club this summer.

That’s according to Het Laatste Nieuws, who say the Magpies may have to battle Roma for the defender’s signature.

The newspaper states that Jose Mourinho’s side are ‘angling’ for a move for the Belgian centre-back, with the Italian side showing an ‘express interest’ in him.

A ‘top transfer beckons’ for Faes, who has established himself as a key player for Reims since joining from KV Oostende in January 2020.

Indeed, the club’s president Jean-Pierre Caillot recently confirmed to radio station Europe 1 that a move away from the club is ‘imminent’, and Newcastle are one of the clubs interested.

They are among the various foreign clubs to have ‘expressed their interest’ in the defender, but Roma are currently leading the pack. 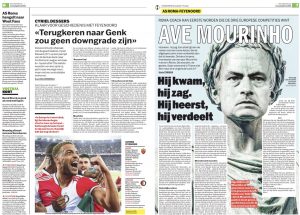 Their interest is the ‘most concrete’ of the chasing pack, but the Conference League finalists will have to pay a ‘hefty ransom’ to get the defender as his current contract runs until 2024.

That may be a problem for the Italians as finances aren’t great, a problem Newcastle don’t have given the wealth of their owners.

At the moment, they are yet to flex it, but they could do here if they decide to take things further than simply expressing an interest.