The Spanish media love linking Mikel Merino with an exit from Newcastle United, and have been doing it since not long after he joined the club.

Merino had been close to joining Athletic Club Bilbao, but the Basque side took their time too much, and lost out on the player.

Their interest is once again mentioned by AS on Wednesday, which is no surprise.

Athletic have a strict recruitment policy regarding Basque players and Merino is one of a limited number who fall into that, so the club always have to maintain some level of interest.

AS say Real Betis are also keen on the midfielder, but the Spanish newspaper point out there’d be several hurdles in the way of a deal for the Seville club. 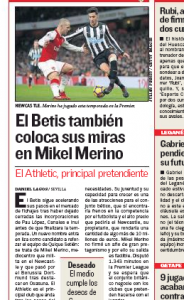 One of those is the €10m asking price it’s believed Newcastle would ask.

If AS feel Betis would see that as a hurdle then it’s a wonder what the club would make of the actual price, rather than an optimistic one pushed by the Spanish media.

The 21 year old has a contract until 2022, and Newcastle United surely wouldn’t sell for €10m.

Despite that, AS state Newcastle are ‘expected to negotiate with the clubs that intend to take the player’.

Club ‘thinking’ about late move for Tottenham defender – Looking at...