Newcastle United have included Matheus Nunes in their summer target list after failing to take the midfielder away from Sporting in the winter market.

That’s according to Record, who say the Magpies made a loan proposal with a buying option set at €13m, but the deal never materialised in January.

The report further adds Newcastle’s ‘old interest’ in signing the Brazilian could ‘soon materialise’. The ‘contacts’, most likely between the player’s camp and the Portuguese champions, already exist with a view to a possible sale this summer.

There’s a meeting scheduled next between Nunes’ representative and Sporting officials, and the summer options available for him will be evaluated. 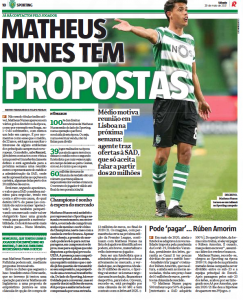 It’s claimed the Primeira Liga side will need a minimum proposal of €20m to start negotiating the South American’s sale.

Steve Bruce’s side already made a loan offer with a €13m purchase option at the start of this year. Newcastle can bring Nunes to St James’ Park if they are willing to pay the fee requested by Sporting.