Home Europe Newcastle United could ‘position themselves’ for transfer – Club have player ‘for...
SHARE

Last week, we carried a report from Mundo Deportivo, who explained that Newcastle United’s interest in Emerson is ‘well known’.

The right-back is co-owned by Real Betis and Barcelona.

Tuesday’s edition of Mundo Deportivo once again mentions their earlier claims and then provides further information about the defender.

It’s claimed the Catalan club are already managing interest from ‘top tier’ European clubs, and this is when the Tyneside club get a mention.

According to the report, the Magpies ‘could position themselves’ for signing the 21-year-old, along with Everton, Tottenham Hotspur and Bayer Leverkusen.

As per the agreement between Betis and Barca, the fullback will be at Estadio Benito Villamarín until 2021. If Quique Setién’s side want to take him this summer, they will have to pay a €9m fee to Los Verdiblancos.

The defender’s desire is to play for Barcelona, but he’s aware the Blaugrana have ‘put him up for sale’ and the latter ‘want’ €25-30m from his transfer. 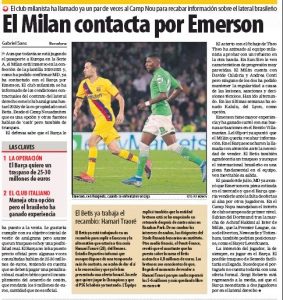 Steve Bruce has Emil Krafth and DeAndre Yedlin at his disposal, and both have featured in 15 league matches this season.The latter has a year left on his contract.

Emerson, who has three goals and five assists for Betis, would be a welcome addition to the right-back position at St James’ Park.

Apart from the aforementioned clubs, AC Milan have contacted the Spanish giants as they are also interested in the Brazilian.