Barcelona have around 10 of their current squad for sale, according to Marca.

The Spanish newspaper explain that whilst Barcelona won’t want to sell all 10 of the possible leavers, they do want, and need, to sell some due to their out of control wage bill.

On that note, recent links between Newcastle United and Jasper Cillessen are given something of a boost. It’s been reported in England that Rafael Benitez would be keen on the Dutch goalkeeper, and Marca likely have some good news for the Newcastle manager.

The Spanish newspaper reckon Cillessen could be available for as little as €10m, given that Barcelona didn’t pay a big fee for him in 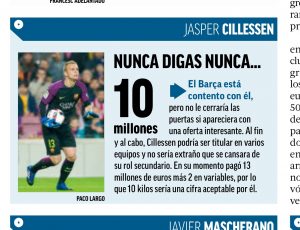 That’s a good price for a goalkeeper who would be first choice at a lot of clubs, and it would be no surprise if the figure is an underestimation from Marca.

Newcastle United, and any other interested clubs, would likely have to wait until the summer.