Newcastle United have made an attempt for Sporting midfielder Matheus Nunes, according to reports from Portugal today.

Newspaper O Jogo says the Magpies tried to sign the 22-year-old on a loan deal until the end of the season plus an obligatory buying option of £10m.

Sporting, however, have turned down the offer. The outlet claims the club are ‘closing the door to any departure at this stage of the season’.

The report also points out that despite being Brazilian, Matheus has a Portuguese passport and would find an easier path to get a working visa for the Premier League.

That doesn’t seem to take into account the post-Brexit rules. 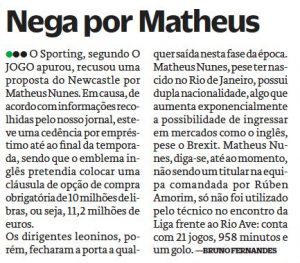 Matheus Nunes is a midfielder who’s been gaining more playing time for Sporting in the past few months, getting 22 appearances in the current season.

He’s mostly a rotation player, with only one goal scored this season, and that’s why he isn’t someone who we see making headlines in the local media.

Newcastle United probably saw something interesting in him to make such offer in the January transfer market, so perhaps we’ll see something more reported by the Portuguese press before the window shuts.