Strap yourselves in and get ready for a transfer ride, this one is messy.

Portuguese newspaper A Bola have a big feature in their Friday edition on Newcastle United and Yacine Brahimi.

With a headline reading ‘Newcastle attacks Brahimi’, it’s claimed that in Algeria it’s stated the player could be on his way to join Rafael Benitez.

The Newcastle United manager is presented as being enthusiastic about signing the winger, and finally taking the much linked player to the Premier League.

So over to Algeria we go.

DZ Foot reports Newcastle are ‘about to make an offer’ for Brahimi… according to the English press.

Le Buteur report Newcastle ‘would be willing to make an offer’ for Brahimi… according to HITC.

Competition.DZ claim ‘Benitez wants Brahimi this summer’ and that Newcastle are considering an approach, but this is part of a round-up of Algerian related transfer rumours from Europe. 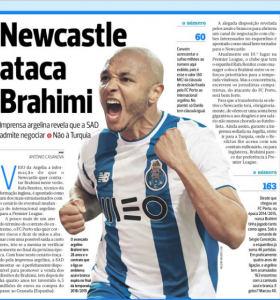 Back to England, where there’s nothing apart from a HITC opinion article saying Newcastle ‘should’ make a move for the player. The website publishes countless similar articles, and sometimes it causes confusion.

When translating ‘should’ into different languages it can often be misunderstood as the definition meaning something is probable, not as a recommendation.

And all of that has prompted a huge fuss from Portuguese newspaper A Bola. They’ve done this before, they really ‘should’ be wise to it by now.