Let’s take you back to early August, when Newcastle were going around France trying to find a young, left-footed centre-back.

Rafa Benitez and co.’s first port of call was Paris Saint-Germain’s Stanley Nsoki, who eventually rejected their advances, and for good reason.

The 19-year-old has emerged as a regular first-team player under Thomas Tuchel, playing in four of the Ligue 1 champions’ five games so far, starting three of them, all at left-back.

Having sold Yuri Berchiche and still not fully convinced by Layvin Kurzawa, Paris Saint-Germain have now decided to reward the youngster for his early season performances by giving him his first professional contract, which is likely to be unveiled in the coming days. 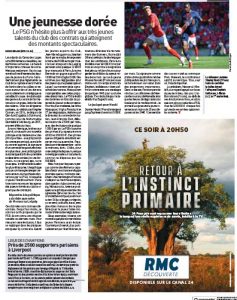 As part of the deal, Nsoki is expected to earn more than €3m from his signing on fee, which is a stark contrast to the €5k/month he’s currently pocketing.

L’Equipe state that Newcastle’s, and especially Marseille’s interest in the 19-year-old is what caused Paris Saint-Germain to throw the cash at him, seemingly finally realising the talent they had at their disposal.

If anything, Nsoki can be grateful towards the Magpies, at least partially.