In the past couple of weeks, we’ve covered a couple of reports from Portugal claiming Newcastle United could return to try and sign Gonçalo Inácio from Sporting this summer.

Following an attempt to land the defender in January, the Magpies would be preparing to return with a more convincing bid and finally take him to the Premier League.

Now it seems it won’t be easy to buy him from the Lions in the upcoming transfer window, at least according to what’s written by newspaper O Jogo today.

The outlet features a piece about Sporting’s decisions regarding players who’ll stay in the squad for next season, and when speaking of Inácio, it’s stated he’s one of the assets they want to keep. 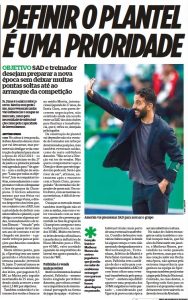 O Jogo recall the attempt made by Newcastle in January, pointing out he’s on the radar of European clubs, and they say Sporting will ‘do everything’ to have him in their squad for one more year. That’s why ‘only irrefutable offers’ could take him from the club this summer.

Since it had been claimed earlier this year that Newcastle offered €30m for Inácio, the Magpies should be looking at his release clause, which stands at €45m, in case they go back for him now.