Samaris for 20 million – Sale to England is imminent – Greek midfielder ‘proud’ of his time at Benfica, but wants to play more.

These are the words on Record’s Tuesday front page. When you read it, could easily assume Benfica have an agreement to sell him to a Premier League club, but they don’t.

The story basically says that club president Luis Filipe Vieira is confident he can sell the player ‘to England’, and still get €20m, double what they paid to Olympiacos three years ago.

There are three clubs who have been linked to Samaris lately: Newcastle United, Sunderland and Zenit. As a move to Russia is not the first option, the other two clubs would have an advantage.

Sunderland were the first to show their interest, but it was claimed they could only afford the player in case they remained in the Premier League, something that did not happen.

With Newcastle going up and Sunderland going down, the odds have changed.

Record are a little more optimistic about Newcastle, who were linked to him in January, and whose promotion to the Premier League means more money. 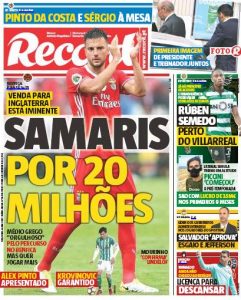 But there’s no concrete information on talks or a bid. It’s just speculation for now, whilst Luis Filipe Vieira tries hard to convince everyone he’s selling another player to England.

We’ve seen this story many times, and it can’t be taken seriously until something more concrete shows up.

Newcastle have been dragged into another Portuguese transfer saga, and Sunderland edged out.