Portuguese side Benfica keep having trouble to extend the deal of the Newcastle United target Andreas Samaris.

It’s been a while since the rumours about a contract renewal with the midfielder started, but there hasn’t been a lot of good news for the Eagles so far.

And as reported by newspaper O Jogo today, Samaris has already received two approaches from the club, but none of them was good enough to convince him.

That’s why Benfica are starting to worry, since his current deal expires in 2019, and they could see themselves forced to sell him next summer. 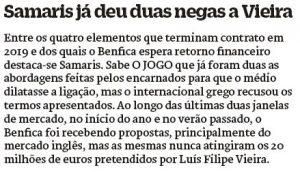 O Jogo claims the president Luis Filipe Vieira has decided that the midfielder should now sign a new contract or leave the club, with them still demanding €20m for him.

The outlet says that the ‘English sides’ are those who want him more, but despite the strong interest in the summer, that price was never reached.

From all the reports we’ve been covering in the past months, we know that Newcastle were in the chase, with €15m a bid and even a personal agreement reported.

So it should now be up to the Magpies to put pressure on Benfica and try to get him for less.

Either that, or finally pay the price they’re asking for.