Home Championship Newcastle and Southampton in for player, chances of an offer arriving are...
SHARE

Ruben Semedo seems to be full of possibilities for the next summer. After a banner brought by the fans saying “Bon voyage” to him at the last game of the season, the defender doesn’t seem much concerned and has a handful of options before taking any decisions.

As reported by Record today, Semedo, who claimed he ‘did not see’ the banner, has an offer to renew his contract at Sporting and get a pay raise. That, we must say, was unexpected, even because his current deal only expires in 2022.

But Premier League clubs are coming for him. The newspaper claims that Crystal Palace, Southampton, Newcastle United, and West Ham all want the player, and the possibilities of an official offer are ‘strong’. 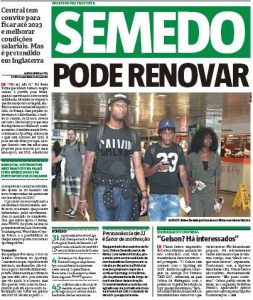 Record doesn’t seem to know who would be closer to geting Semedo this time, even though recent reports claimed that Southampton would be more likely to bid first, and then it was claimed Newcastle had initiated contact with the player’s agent.

Despite the presence of a Lille official at Alvalade last weekend, France is not mentioned as a big possibility this time, as the player should be choosing between Sporting or a Premier League club.

The Portuguese papers have been saying that €15m could be enough to get Semedo, despite his €45m release clause. Newcastle and Southampton have easily been the most linked Premier League clubs, with Crystal Palace and West Ham now thrown in as well.