After being heavily linked to the Brazilian left-back Rogério in January, Newcastle United are reportedly making a new attempt to sign him this summer.

The news come from Tuttosport today, who say the player is returning to Juventus from his loan spell at Sassuolo, but could spend little time at the Old Lady.

The newspaper explains the Magpies were already interested in taking him earlier this year, and now, will offer an amount of between €20m and €25m.

Tuttosport don’t say how much Juventus will want for the player, but the end of his loan spell should certainly make things easier for a new move. 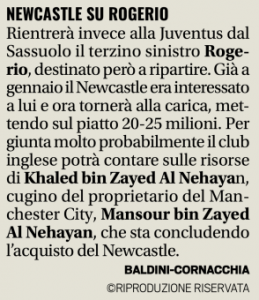 Juventus signed Rogério from Sassuolo back in 2016. A year later, they sent him back to the club on a two-year loan.

It means the Old Lady never really used the Brazilian in their first team, and it doesn’t look like they will.

Tuttosport also mentions the fact that Newcastle may be taken over by Khaled bin Zayed Al Nahyan.

With the market keeping an eye on this move, perhaps clubs will start demanding more money from the Magpies after knowing they have more to spend.