Over the past couple days, there has been a question mark in Italy about the future of Inter’s Valentino Lazaro despite him arriving in the summer for a fee of around £20m or so.

The Austria international has struggled to find game time under Antonio Conte this season, and there have been reports suggesting the Serie A side could loan him out to help him get back into the swing of things, with West Ham one of the clubs reportedly interested.

However, they appear to have disappeared off the radar, with Newcastle United taking over, as both Gazzetta dello Sport and Corriere dello Sport claim Steve Bruce’s side are among those sniffing around the 23-year-old.

The former of the two explain that Inter are now happy to send Lazaro out on loan, and while there are a number of teams in Germany who like what he has to offer, only one club have ‘seriously enquired’: Newcastle.

They state that, for now, it’s only been ‘first contacts’, but Lazaro’s road is now ‘traced’, and the player’s ‘sacrifice’ is a ‘necessary step’ for Inter in this transfer window. 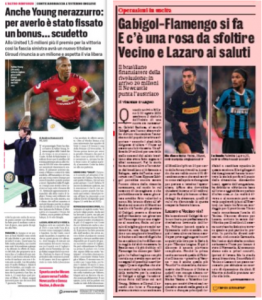 The player’s agent was in Milan on Thursday, where he ‘listened to the offers’, but it doesn’t seem like a decision has been made yet.

That’s now two big newspapers pushing the Newcastle angle, suggested there might be something in it.

Now we just have to wait and see if it develops…