As seems to becoming something of a tradition, Hamburg flirted with Bundesliga relegation last season. The German club haven’t had their greatest few years and, once again, the summer plan is that things will be better during the next campaign.

That will involve players coming and going, and SportBild believe Pierre-Michel Lasogga is on the exit list. One of Hamburg’s highest earners, it’s time for the striker to find a new club, reports the German magazine.

Only Newcastle United are mentioned, and it’s said they ‘knocked’ for the player last summer, but didn’t return with a concrete offer. With a sale much likelier this time around, any Newcastle return would have a good chance of success.

However, it would be buyer beware. 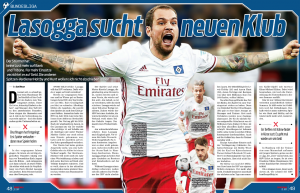 Lasogga spent a lot of time on the bench last season, and only managed a solitary Bundesliga goal.

Whilst Rafael Benitez interest was widely reported a year ago, it would be a surprise if Newcastle United grasped this second chance.