Alphonse Aréola to Newcastle keeps getting pushed by France Football.

The Paris Saint-Germain goalkeeper, despite some assurances from Thomas Tuchel he will be counting on the France international next season, continues to be sent around Europe as a potential target for a number of clubs.

As well as the Magpies, Napoli and AS Roma (if Alisson leaves for Real Madrid) are both recurring names next to Aréola’s, who could end up being one of the casualties of the Ligue 1 champions’ need for €60m before the end of June.

The French magazine report this week that Rafa Benitez has held ‘multiple meetings’ with the 25-year-old, and Newcastle would be ‘ready to pay €15-20m’ to buy out the last year of the goalkeeper’s contract. 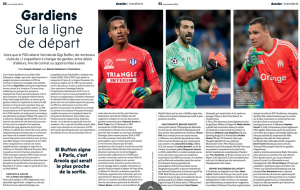 However, having already made Martin Dubravka’s loan from Sparta Prague permanent towards the end of May, it remains to be seen if the Premier League club actually do need to spend that much on another shot stopper.

Surely there are more important areas to spend that kind of money on?