On Wednesday, a report in France claimed that Newcastle United’s potential new owners, PCP Capital Partners, had targeted Kalidou Koulibaly to be the ‘cornerstone’ of their project at St James’ Park.

Foot Mercato were reporting that, should the takeover be completed, the club would pay ‘near the maximum price’ for the Napoli centre-back, wanting to elevate their squad to a new level.

However, the Senegalese isn’t the only player in Italy Newcastle have their eye on, as La Nazione report the Magpies have also set their sights on Federico Chiesa.

Also targeted by big clubs such as Manchester United, the Fiorentina winger could be set for a big transfer this summer, one worth around at least €60m.

The Red Devils reportedly made a first bid of around €50m, which wasn’t deemed enough, and the local newspaper state Newcastle have, ‘over the past few days’, started looking at Chiesa. 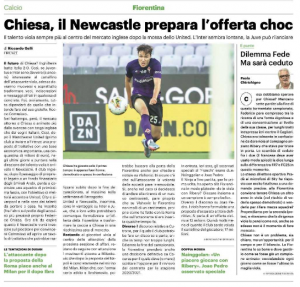 As of yet, there’s no indication as to how much the Tyneside club would be willing to put on the table, but with potentially considerable funds at their disposal, La Nazione believe they will overtake the likes of Inter and Juventus in the race for his services.

In fact, the newspaper simply headline that Newcastle are ‘preparing a shock offer’ for the forward.

If they do manage to convince Rocco B. Commisso to sit around a table to negotiate, it would have to be after the season ends in Italy, ‘at the latest in the week of August’.

The clock is ticking, but first, that takeover needs to happen.