For the past few days, the Italian sports media have been linking Aaron Ramsey with a move to Newcastle United in the winter market.

Tuttosport continue the trend in today’s edition of the newspaper as they state the Magpies are ‘one of the most interested clubs’ to sign the Juventus player, along with West Ham United and Everton.

However, the Wales international’s current wages have become a ‘problem’ for the Magpies and others.

His contract runs down in 2023 and earns €7m net per year, meaning the Old Lady will have to pay €10m to keep a fringe player at the club for the next 18 months. 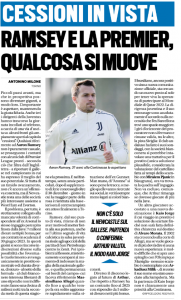 The Turin club have no desire to retain the ex-Arsenal star until his contract expires and instead, they are ‘interested in getting rid’ of him and his considerable salary in the ongoing window.

Ramsey has not made an appearance for the Serie A side since October and recent claims have stated he not been training with the rest of the group.

Despite the current situation, the interest shown by Eddie Howe’s side and others, Tuttosport says the Welshman has ‘no reason to hurry his departure’ from Juventus in January.