The news is bought by Portuguese newspaper O Jogo today, as they report that Boavista are signing the 18-year-old.

They claim that the player has been in quarantine and is now ready to travel to Portugal to complete his move from Caracas FC.

O Jogo makes it look like a big deal that Boavista managed to beat the competition from both Newcastle and Cagliari, as they mention it twice in their story. 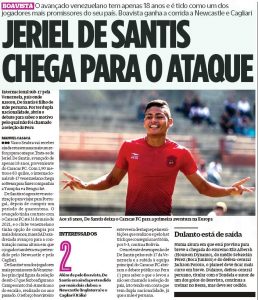 However, there aren’t many details on how the race went, or how much Boavista are spending with the transfer.

Despite being quite young, Jeriel de Santis is a regular starter at Caracas. He’s also been drawing some attention for his performances for Venezuela’s youth ranks, as he scored a hat-trick against Bolivia in the U17 South American Cup last year.

Since it’s not clear if the striker has a European passport, perhaps a work permit was the issue for Newcastle.