Matheus Nunes’ recent form for Sporting has convinced newspaper Record to feature a story today claiming the midfielder is ‘ready for the market’, as it will be hard for the Lions to keep him in their squad beyond this summer.

And when speaking of the clubs who could take him away from Lisbon, there are two who are said to be ‘on top of the list’ to sign the 23-year-old. Those are Manchester City and Newcastle United.

We all know the Citizens’ interest was boosted when they played Sporting in the Champions League, as manager Pep Guardiola sent big public compliments towards Nunes.

Record says Manchester City had already been following the player, and became ‘even more attentive’ after seeing him in action in the European competition. 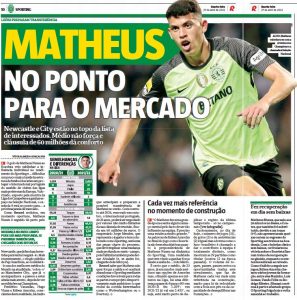 Regarding Newcastle, Record says the player is ‘followed closely’ by the Magpies, who have already made two attempts to sign him in the past.

Nunes is protected by a release clause worth €60m, and the newspaper he won’t go for much less. Sporting are well aware that he may leave this summer, with manager and directors all getting prepared for his farewell.

It’s claimed that agent Jorge Mendes will be one of the ‘keys’ in the process, while the player will not force his way out and only leave for ‘favourable conditions’, which includes an ‘ambitious project’.