After reports from the English and Greek media about Newcastle United’s interest in Benfica’s Andreas Samaris, the Portuguese press brings some detailed updates today.

A couple of outlets report it, but it’s really O Jogo who brings the big story about Rafa Benitez’s chase to sign the midfielder in the January transfer window.

The Magpies have been interested before, and were recently back watching the player in Lisbon. O Jogo says the scouts were ‘pleased’ with what they saw and decided to go for the player.

With Samaris’ contract with Benfica expiring at the end of the season, it’s claimed that Newcastle are offering €500k to get him on a loan until the summer, and will then offer him a three-year contract, once he becomes a free agent.

That’s way less than the €15m offered by the Magpies two years ago, when Benfica closed the door and said he would only leave for €20m. 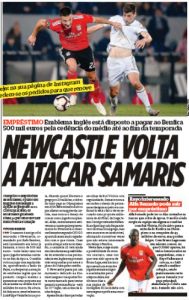 Still, that’s a strange situation. Newcastle could simply offer him a three-and-a-half-year contract and agree a fee with Benfica. However, it sounds like they will test the player first.

Footballers don’t really like the chance of standing without a contract at the age of 29. So as O Jogo says Benfica are thinking of offering him a new deal, maybe the Magpies have to make their offer better.